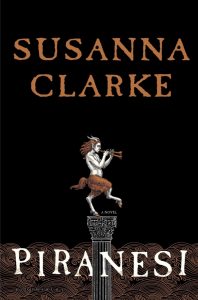 Piranesi’s house is no ordinary building: its rooms are infinite, its corridors endless, its walls are lined with thousands upon thousands of statues, each one different from all the others. Within the labyrinth of halls an ocean is imprisoned; waves thunder up staircases, rooms are flooded in an instant. But Piranesi is not afraid; he understands the tides as he understands the pattern of the labyrinth itself. He lives to explore the house.

There is one other person in the house―a man called The Other, who visits Piranesi twice a week and asks for help with research into A Great and Secret Knowledge. But as Piranesi explores, evidence emerges of another person, and a terrible truth begins to unravel, revealing a world beyond the one Piranesi has always known.

I picked up this book after seeing it recommended by Jason Snell on his Favorite Books of 2021 on Six Colors roundup. Jason Snell is a voracious consumer of culture and documents much of it on the Incomparable family of podcasts, so I have a good sense of where our tastes overlap and where they diverge. In his one paragraph review of the book, this line immediately grabbed my attention:

“Is this all a metaphor for something, or is it real? All questions are answered, eventually. Sometimes in surprising fashion.” Jason Snell reviewing, Piranesi

As the year drew to a close, I began thinking about what I wanted from the new year. I found myself yearning for a personal revelation, a glimpse of who I was to become after a period of personal and professional unrest. “Is this all a metaphor for something, or is it real” is a question I’d been turning over in my own life. Little did I know…

Even before beginning this book this book I saw it compared to Plato’s ‘Allegory of the Cave’ and knew that it contained many, many references to C.S. Lewis. I suspected it would be a book about the nature of humanity only to discover it was also about our search for purpose (and the fight to keep that search from consuming us alive), about the beauty that can be found on journey to whatever destination we’re headed, and ultimately a story that was both sad and heartwarming, charming and bittersweet. Coming into a new year, looking for a personal re-awakening, I was in a perfect mindset to read this book.

The rest of this review represents SPOILERS for Piranesi—you have been warned.

The initial act of the book introduces us to the main character as he explores his “world,” which he calls, “The House.” The House is infinitely large, filled with statues and classical architecture that seems to be not of our narrator’s world, but instead of our own. The story unfolds through journal entries our narrator writes to document his “research” of the world and its secrets. Gradually it becomes clear that the narrator is trapped in some type of maze much like the Greek Labyrinth that Daedalus created to trap the Minotar. The House, while benevolent, beautiful, and kind in the eyes of the narrator also seems to be serving as his prison.

The protagonist is aware of fifteen people in the world; thirteen dead, himself, and “The Other.” The Other visits our narrator regularly and calls him Piranesi. The Other is on a mission to find Great and Secret Knowledge and is relying on Piranesi’s familiarity with The House to help achieve that end. As the story evolves, it becomes clear that The Other is not from The House, but instead from another world. Piranesi’s knowledge of that other world expands as he and the Other begin discussing another person, one Piranesi calls Sixteen. The Other states that Sixteen is a wicked person who means harm to both Piranesi and himself. We also meet the Prophet, who appears to be the erstwhile mentor of The Other. The prophet reveals that the Other is a man known as Valentine Ketterley and plants seeds of doubt in Piranesi’s mind as to the Other’s character. It is the Prophet who ultimately teaches Sixteen to enter The House.

“All that is true. But I haven’t got his mind and I haven’t got his memories. I don’t mean that he’s not here. He is here.’ I touched my breast. ‘But I think he’s asleep. He’s fine. You mustn’t worry about him.” – Susanna Clarke, Piranesi

This exchange touches an old wound for me, personally; though long healed and now a source of strength.

For me, this exchange alludes to the fact that as humans we can undergo such immense change in our lives it’s as though we become a new creation. I experienced this foundational change most deeply after I left my first adult job and moved 1,200mi across the country. At the time, I knew I needed to find “my next” but I didn’t think I could do it while I was working in a job that I loved, with people that I cared deeply about, but that was no longer leading down a path to which I felt called. My decision was to jump, largely without a plan, and trust the process. I can’t go back and do it any other way, but even if I could, I most likely wouldn’t, despite the fact it was one of the hardest things I had done to that point.

Life after that foundational shift felt different. It was around that time I reconnected with this blog post from YouTuber and Podcaster CGP Grey – “I have died many times.” It was a perfect summation of the metamorphosis I had just undergone. I didn’t feel like the same person any longer. The person who lived in New York, taught lessons on Sunday morning, created interactive experiences for children and youth, and who was (an extremely) minor celebrity in the town of Pleasantville had died. I had his face, his hands, even his memories, but he was asleep, fine, and I was in the process of discovering who I was to become next. The dividing line isn’t always as stark, but it’s a process that I recognized from other periods in my own life.

My favorite part of the story of Piranesi, is the glimpse we get at the very end of yet another transformation as our narrator is reborn once more, no longer Matthew Rose Sorensen, but in the same way, not Piranesi. For a different author, It might have been easier to conclude the story of Piranesi as a triumphant return into our world, the world of Matthew Rose Sorensen. After exiting The House and returning, Piranesi could easily have fallen back into his old consciousness, but that’s not how it works, in either his world or ours. CGP Grey compares the transformation of a human mind over time to the Ship of Theseus, it may happen one small part at a time, often slowly, or as in Piranesi’s case (and mine) more suddenly, but “soon your mind is a new inhabitant of an old skull.” And it’s a one way road.

And there is no going back. The narrator, after returning to the Old World, describes returning in his dreams to The House:

“I dreamt that I was standing in the fifth northern hall facing the statue of the gorilla. The gorilla dismounted from his plinth and came towards me with his slow knuckle-walk. He was grey-white in the moonlight; and I flung my arms around his massive neck and told him how happy I was to be home. When I awoke I thought: I am not home. I am here.” – Susanna Clarke, Piranesi

“I am not home, I am here.” Many times in my life I have yearned for “home” and more often than not, what I was longing for was a ‘place’ to which I could never return–because it wasn’t a place at all, it was a moment, a feeling. This longing has persisted into my adulthood–I still feel homesick from time to time–and that feeling has only increased during this period of “gestures wildly.” In reality, there is no going home, just longing, but that longing should not dampen the profundity of “here.” Despite a longing to return home, ultimately “here” is exactly where we are meant to be. To quote author and YouTuber John Green, “our lungs were made for this air.” We are here and there is no where else we were ever meant to be. In one episode of “The Anthopocene Reviewed” Green writes,

“we are, we exist, we are here, a series of astonishing unlikelihoods has made us possible and here possible.” – John Green, The Anthropocene Reviewed

We don’t get to see what our narrator’s life will look like away from The House beyond a few quick vignettes but maybe that’s as it should be. We don’t get to know what will cause future metamorphosis. I don’t get to know what 2022 has in store for me, personally, either. I don’t know what transformation is coming, but I am trying to remember that when if I don’t feel at home, I am here, a product of many past “me’s” leading through astonishing unlikelihoods to make me possible and to bring me exactly here.

May we all be “Beloved Children of The House.”